×
Did you know that Comet exists in a US version as well?
Go to Comet America

This website is using cookie files for provision of services, personalization of advertising and for analysing of visit rate.
By using this site you agree to our use of cookies. More information

Monitoring of temperature and humidity by means of wireless WiFi network

State regional archive Zamrsk is one of seven main archives in Czech Republic. It is based at the building of castle and archives the whole range of valuable archives. It is necessary to store archives under required climatic conditions and environmental monitoring plays a key role here. Depositories are located around courtyard. Distances between measured points are up to 200 meters. At the moment seven points are monitored.

Wireless data transfer via WiFi network was chosen, because cable data network was not possible to realize at historical castle building.
Castle with archive is located in area with only several buildings. From that reason wireless 2.4GHz band could be used. For more difficult
condition also 5GHz band can be used. The advantage of 2.4GHz band is especially lower cost of network components. It is possible to recommend to use wireless WiFi network at historical buildings where cable data network are not installed.

System with use of wireless WiFi data transfer is strongly more flexible in comparison with system based on transmitters directly integrating measuring and wireless parts. Additional measuring points can be added to the system with minimum cost. If a switch is added to the system other network devices can be connected (network printer, VOIP telephone, other computer connected to Internet).

The complete system was tested in complex during trial operation. High reliability and functionality of the entire system was proved by the end user. „From many offered systems system presented by HAKU company showed as one of most effective. On top of that system is based on long term proved transmitters of COMET company, which portable version was used in Zamrsk castle up to now.” says deputy director of the state regional archive Mgr. Jiri Kuba. 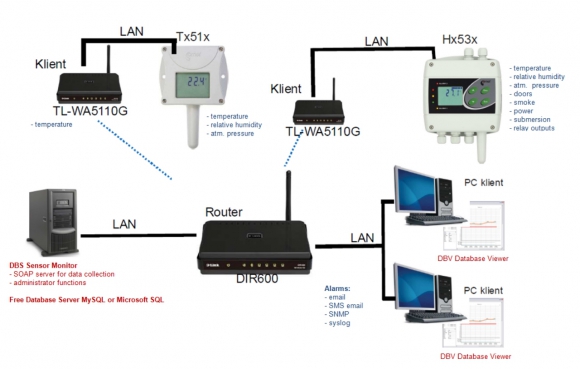 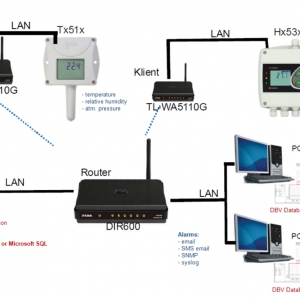